I’ve just spent the last week in Ireland delivering some really cool community engagement events with Streetvelodrome to children and adults across Ireland. This was all part of international Bike Week and the aim was to get as many people as possible on to bikes and having fun.

We started off in Ballymena, Northern Ireland with Mid and East Antrim Borough Council delivering the first of our Access events. It was great to get to meet everyone from this small community and get them involved in something a bit different!

We then moved down to Dublin with a few events around the edges of Dublin before moving right to the centre in Smithfield Square for the final days of our tour.

First up we were in Dundrum with lots of school trips coming to take part in the fun. 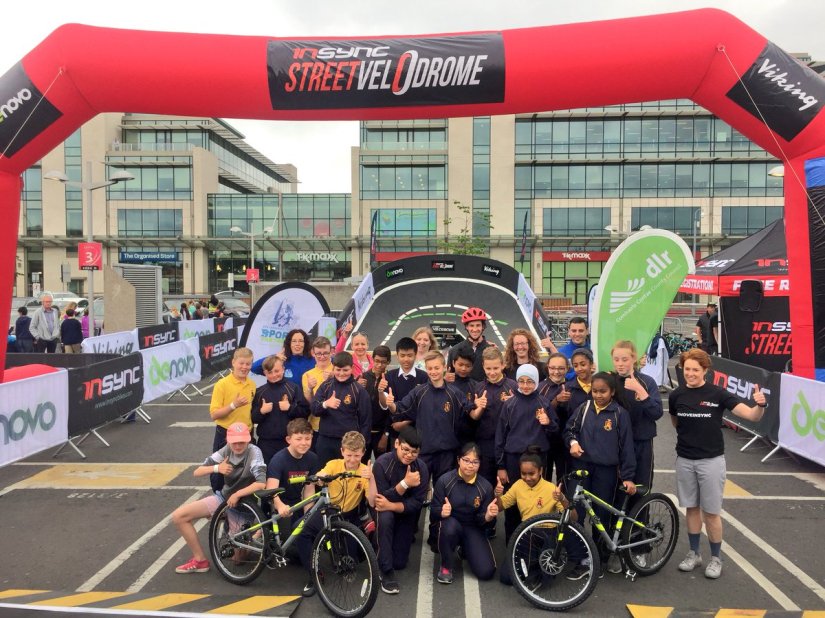 Then we moved to Millenium Park in Blanchardstown with another 5 schools as well as public sessions later in the day.

Gaeilge countdown for our Irish schools on @streetvelodrome today 👂 pic.twitter.com/o9rE7PUd3R

I also got to take the mic whilst our lovely compere Emer rested her voice after a full-on start to the week.

Finally we moved to Dublin centre where we remained for the final three days coaching school classes and getting the general public involved with Bike Week.

The week finished up with the first round of the Viking Pro Series with elite athletes from all over the world flying out to compete. After a week of practising on the velodrome I was feeling pretty confident but also knew that there were some really strong and experienced contenders also competing.

I’m starting to get blisters on my hands from the cobbles!!! 💁‍♀️ pic.twitter.com/5jz4HcmufE

I managed to survive until the bronze medal ride off and had to console myself with fourth after a great week of cycling!

Here’s Streetvelodromes video of the action:

It’s been such a great week with @streetvelodrome in Ireland and it was fun to finish it off competing in the #VikingProSeries with some top riders from around the world 🏆 pic.twitter.com/RmJiQWEfnE

After a week of giggles with @streetvelodrome in Ireland I’m not sure I’m ready to go back to normal. I miss everyone too much! pic.twitter.com/GRxFFWU2i9