Our first race as Team RGB Building Supplies was the opening round of the National Road Series by British Cycling and HSBC. Up in Lincolnshire, it was a chance to explore a new area of the UK and measure ourselves against some of the top riders in the country.

We're on our way to Lincolnshire for the @TourOfTheWolds 🚗 🚗 🚗 pic.twitter.com/RyZZ9aKsKK

We're well on our way north to the Tour of the Wolds, the first round of the National Road Series tomorrow in Lincolnshire. #BuildingPerformance . . #roadtrip#womenscycling#scimitarsportshq

The Tour of the Wolds is a brand new event for 2017, following on from a rich tradition of cycling events in Lincolnshire, which has played host to national championships and the Lincoln Grand Prix – a regular fixture in the Spring Cup Series and National Women’s Road Series lineup.
Racing kicked off at 9am, rolling out of Louth for 100 kilometres heading through the Wolds to the Caistor Loop via a series of climbs. The peloton of 95 women were fresh and keen for the first race of the elite calendar and the challenging terrain soon started to split the field. Anyone outside of the main peloton soon faced strong cross winds slowing their chase back into the main bunch.
For our girls, Tour of the Wolds was the first big road race of the season, and the first time racing at an elite level this year. With big teams present (including pro UCI teams – whose riders’ live and train abroad) we felt excited and little bit intimidated on the start line! The race started fast and soon we were working hard to maintain position in the constantly moving group of riders.
As the race rolled across the Wolds Alice and Susan got gapped by a few mechanicals and crashes ahead of them, meaning they were now racing in a smaller group to catch up with the main peloton. Meanwhile, Jenny was perfectly placed in the top 20 riders and looking strong for the finish.
But then a rider swerved ahead of Jenny, forcing her into a puddle where her wheel slid out and left her on the ground as the rest of the riders raced away. Although suffering no terrible injuries and her bike remaining surprisingly mechanical free, it was a few moments before she was up and chasing back after the race.
Outside of the big bunch, the strong winds became a huge factor and although all our riders rode hard to return to the main group it wasn’t to be. With the race coming in to finish on a tight circuit in Louth town centre the officials had set a 1 minute 30 second cut off – if any riders were too far behind the leaders they would be stopped and unable to complete the race.
Out of the 95 starters only 25 made the time cut into the finishing circuit – what a tough course!

Riders in the women's @TourOfTheWolds pedal up Nettleton Top and are starting the head back to Louth. pic.twitter.com/6MuFuHwGJT 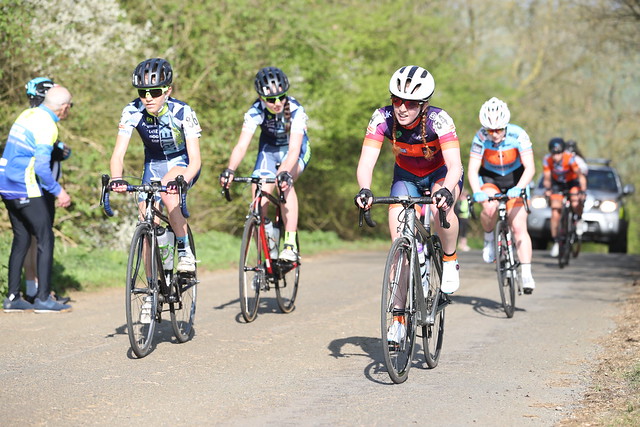 I have some pretty solid sunburn from today – didn't expect 23 degrees up North! #BuildingPerformance . . #womenscycling#fromwhereiride#wymtm#thisgirlcan#bloceyewear#roadslikethese

Tour of the Wolds – Women: After a tough race, Elizabeth Banks sprinted to victory from a small group in Louthhttps://t.co/JNHNp0LpoL pic.twitter.com/FugMMxNErR

Great race @TourOfTheWolds today! Didn't quite go how we hoped but exciting to be racing at last! 🚲🚲🚲. . . #BuildingPerformance#womenscycling#womeninsport#thisgirlcan#womensroadseries#tourofthewolds#fromwhereiride#womenskit#kitwatch#wtfkits#roadrace#wymtm#iwearbloc

For a blow by blow account of the race check out British Cycling’s ‘as it happened’ live feed. They even used a few of our tweets!

Next up, it’s the Essex Giro as round 2 of the National Road Series on April 22nd.

Full list of TV times for the Tour Of The Wolds on Eurosport hopefully you can catch it at least once! There was some great racing pic.twitter.com/1tygXa7jZG